Mia Berg im Interview: »It’s scary to release music that is so personal« 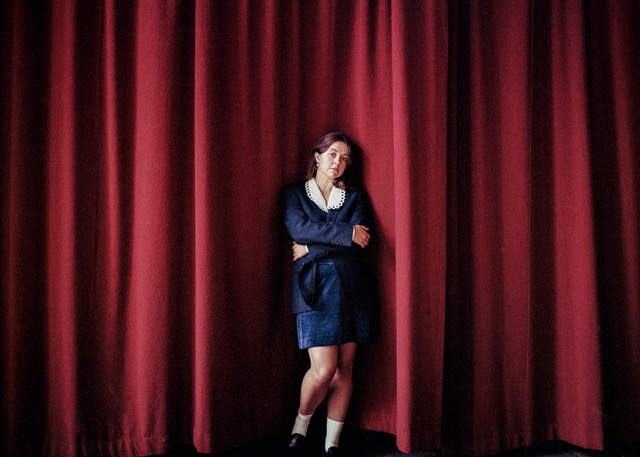 Anna: Alright, so the first thing I have to admit, is that I didn’t know your music before I listened to the album “Sleepwalkers at noon”. And then I saw that you also released an EP in 2019. And I was like: Okay, how did that not come across my Spotify algorithm before? But I completely fell in love, because the songs are just super warm, atmospheric and feel really personal. And then I listened to the other EP, and it also felt like that, but not as intense as the songs now. So how would you say that your sound has changed since the first songs that you’ve released back then?

Mia: I think, when I started making music back in 2017, or 2019 it was different. I was definitely developing over time. So I would say the main difference is that I basically now have the time to focus more on songwriting. But also more on the storytelling in the music instead of aiming for the melody to hit. I guess you kind of said it: it’s more personal. And it’s also about me growing as a person and as a musician, and a songwriter. And I think it was kind of like a natural process where I found my own way to how I wanted to express myself through my music.

Anna: Do you think there are certain factors that influence the way that your music developed?

Mia: Changing the course of my musical expression, I think, has a lot to do with me listening to new music. I remember very well, when I went to Berlin in the fall of 2019 to write music, that it was kind of a starting point. And I began listening more to American singer-songwriter music. So going into 2020 and when the pandemic hit, also, I think certain elements of songwriting became clear to me. I wouldn’t say that the pandemic affected the album, but I would say that it affected the way I was writing. When the world was kind of standing still, you don’t necessarily have a lot of things around you to be inspired by because everything is moving very slowly. That kind of made my attention go backwards to my life in the past and thoughts that I’ve been carrying around. And that kind of shaped the album, I think.

Anna: I totally get that! I feel like like with the pandemic, you were kind of forced to deal with your own thoughts or memories. Because before you could just distract yourself with being around other people and always do something. But then it was like you couldn’t do anything else.

Mia: And I think that kind of forced my thoughts into a certain place, which I guess, it felt very genuine and very honest.

Female power: These women inspired Mia for the songs on her album

Anna: What would you say are the major artists that inspire you? I can hear some Phoebe Bridges and Holly Humberstone vibes.

Mia: I actually think I started with the album around the time I first listened to Holly Humberstone. I found her through Instagram right before she kind of got huge. But um, yeah, when it comes to inspiration, I definitely think listening to Phoebe Bridgers was definitely a huge inspiration for my writing. And just my approach to songwriting in general. Clairo’s last album was also very inspiring for me. And I think, back in 2019, I listened to Sufjan Stevens album “Carrie & Lowell”. It’s actually an album from 2014 – so rather old. But it’s very much just him talking about growing up and the loss of his mother. I just cried a lot when I listened to the album the first time. And I think that connected to something in me as well: just listening to someone not actually doing a lot – like it’s beautiful music, but it’s also very simple.This simplicity is also the element that makes it as beautiful as it is.

Anna: Do you feel kind of insecure before releasing such personal music or have you gone through such a long process of producing it that you’re more excited to release it now?

Mia: It’s obviously scary to release music that is personal and I guess I’ve never been as nervous as I was when I released the first song of the album. Just because it’s been quiet from my corner for like two years. And I went into a collaboration with a new label and everything just felt very good. We had a good plan and I had people backing me up and wanting me to do great. I think that kind of helped the process a lot. It created kind of a safe space for me.

Anna: Do you have a favourite song on the album? I know it’s hard because you probably love them all.

Mia: Yeah, that’s difficult. I think my favourite song kind of changes – so now it’s one and in a month it’s gonna be a different song. But I think at the moment it’s “Meadow”, one of the singles I released before the album. I really like the lyrics and it’s a bit more “back to the roots”-style with the piano. I would say that’s my favourite today.

Anna: I guess it also changes based on the situation you are in right now. Like if you feel a bit more happy or you’re more at a sad point in your life.

Mia: Yeah, but I definitely also think there are songs I feel especially connected to at all times. “I’ll never leave you” for example.

Anna: That was the song that got me falling in love with the other ones.

Mia: Oh, wow. That’s great to hear. I remember very well when we made it in the studio. And it was the easiest one to write but the hardest one to finish with the production just to get like the writing together with how it should sound because it could have gone in different directions. So we just had to work really hard with the mixer and the production to kind of get it how we want it to be, because that was kind of how I heard it in my head – a bit more like the drums on “Motion Sickness” by Phoebe Bridgers.

Anna: All your songs have this vintage nostalgic vibe to it. That connects them all, even if you say that some songs have more of a Clairo vibe or some have a Holly Humberstone vibe. So I feel like they still are in that same kind of atmosphere.

Mia: Yeah, it’s kind of the same universe. And I think that’s kind of important to me. I could make 10 songs that sound really similar. I think I can do that, when I really fall in love with a certain type of sound or a certain type of song. That was maybe the challenging part: knowing that I had to widen my perspective again. Like, either people are more worried about things sounding the same, or they are worried that it will sound too different. It needs to be balanced. But I think the perspective on the album kind of stays on a same level.

Anna: That’s what I also really like about the album. It feels like listening to one story that is consistent. All right, I have one last question. This is a question that we always ask in our interviews and it is the question about an untold story of yours.

Mia: I remember, in April I got asked by a Danish agency if I wanted to play support for an Irish artist, which is Orla Gartland. She had a song on this “new” series – Heartstopper, if you heard of it. Yeah. So I hadn’t heard of her before but I agreed because it sounds fun. And so I went to Denmark and I actually went back to the exact same place where actually played my last gig before the pandemic. I was inviting some friends and like booking people to come but it was Easter Sunday – so not the best timing. And I was like, ok, well, it will be fine. It will be a good evening, I guess. And playing a support gig, you just never really know how it’s going to be like, either people don’t like you and are like: What are you doing on stage? Or people are interested, or something in between and just being polite. But I was standing there with like five guest list places. The fans were lining up like three, four hours before the show. I walked outside to where we just loaded our stuff out the van. And there was actually this guy looking for tickets but it was sold out. He was standing on the corner of the street with a big sign saying “I need a ticket for tonight”. Then the idea of giving him the guest list spots just popped up in my mind. When I went over to him, he was super shocked. I bet he thought I just wanted to prank him or so. So he was just like “no, no, I don’t need any tickets”. He didn’t believe me when I said that I am playing the support for Orla’s show. I told him to tell me his name, and I’ll write it down. And then he was saying his name. But he still didn’t seem to believe me like: “Who are you? Is she joking with me or not?” So but yeah, he went to the show and he sent me a message afterwards: “thank you so much, didn’t know you’re playing support. Thank you so much.” It was kind of a funny thing at that moment. And it was a really, really great show. It was a crazy supportive audience. Super friendly, like probably the best show, I remember. 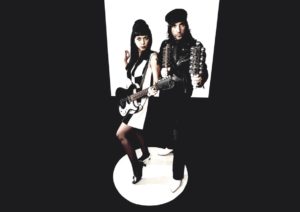 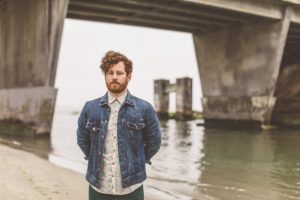 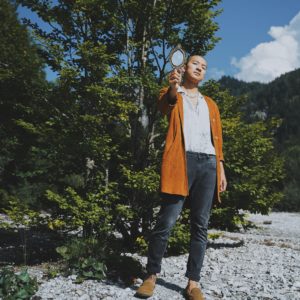 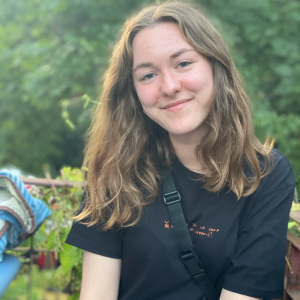