K.Flay im Interview: »One of the things I could control in this piling chaotic world was my own music.« 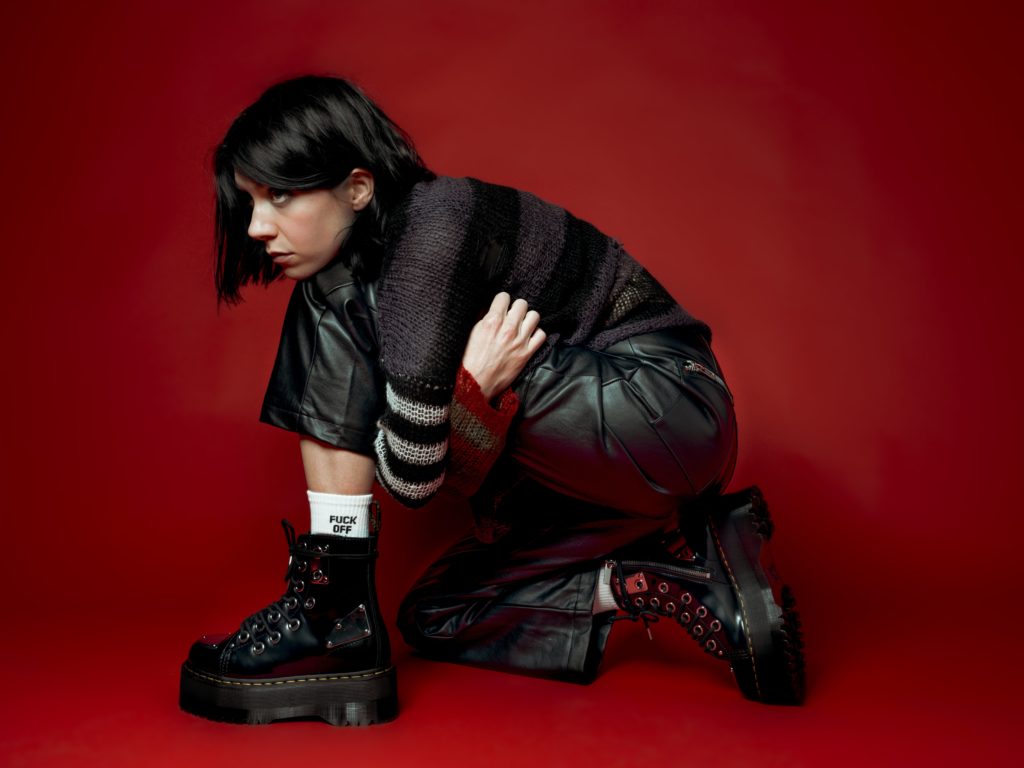 Anna: Hey, it’s so cool to get the chance to talk to you! Your EP “Inside Voices” has been out for a few weeks now. How was the release, how are you feeling now?

K.Flay: The release went really well, I’m feeling good! Yknow, it’s nice to have it out in the world. With new music, it feels like you have a secret that you want to gossip about (laughs)

Anna: You’ve been releasing music for over ten years now, travelled the world and worked with many other inspiring artists. Looking back on your career as an artist, what were highlights or monumental experiences that still stick with you because they influenced you as an artist?

K.Flay: Oh, that’s a good question. It’s hard to pinpoint experiences as “monumental”. The way that I view my career has been a lot of small moments that have brought me where I am today. There were never like these insane moments of things blowing up but just gradually building my skills as a songwriter and a performer and my repertoire, really.

So, I think in some ways the most monumental thing that happened, I said “yes” to playing a show when I first started making music. I have never been on stage before so it was quite a leap in many ways (laughs). And it was saying yes to that experience that kinda opened the door every other “yes”. “Do you wanna sign a record deal? – Okay, yes”. “Do you wanna go on this tour? – Yeah!” (laughs). I think there’s always that moment where the world opens up to you in a particular way and that was the monumental moment. Everything afterwards felt like the product of my luck and hard work and whatever the hell else.

“That sense of curiosity and openness to new experiences has been the driving force in my musical career.”

Anna: When you go back to the very beginning: How did you discover your love for music? Did you know that you wanted to take this leap of saying “yes”, possibly doing this for the rest of your life?

K.Flay: (laughs) No, I did not! I mean, I was 19 or whatever and very much not thinking about the way in which that “yes” might totally alter the course of my life. I said that “yes” in the spirit of curiosity in many ways. And I do think that sense of curiosity and openness to new experiences has really been the driving force in my musical career. Like ultimately, what I am pursuing is the wonder about the world to be human on planet earth. And music has been a really wonderful way to explore that. There are things about the job that are physically and psychologically demanding. But you get to travel, you get to be really vulnerable with people, which is not always a part of peoples work-life. And for me, engaging with my vulnerability and of others has been amazing and keeps me in this world.

Anna: After that little dive into your musical past, your new EP Inside Voices picks up where you left with your last album Solutions. That was in 2019, since then, a lot has changed. A pandemic hit the world and social injustice is fought on the streets more than it has before. I can imagine it sparked some of these inside voices of rage in your new EP?

K.Flay: There are two things going on a society level which is, yknow, shutting us all in and isolating us, forcing us in many ways to sit with our minds. For me, in this time, I’ve been not drinking, not smoking, I was very much soberly in the moment. And that was very uncomfortable at times. Sitting in those feelings of frustration and grief and really a sense of hopelessness.

In the US in particular but across the world, Black Lives Matter and George Floyd murder being the initiation for tons of protests and conversations about what kind of society we build. Yknow, the ways in which capitalism is permeated and built on racisms and misogynies. Those kinds of conversations and that dialogue, I think, undoubtedly have had an influence on my music and the way that I wanted to express things, which is in a more confrontational and direct manner. All that was kinda swirling around in my head. It felt like one of the things I could control in this piling chaotic world was my own music. So I wanted that music to reflect that desire to be direct and confrontational.

Anna: The EP starts off with 4 Letter Words, which got me hooked the second I heard it. Who is that four letter word addressed to?

K.Flay: Well, in the song of course it’s framed in the context of a relationship. And I think like often in individual relationships are a good proxy for bigger, larger themes. So, in a way, the “fuck you” is very shapeless to me. As I was working on this song, it’s about whatever in your life. Yknow, I am a very polite, mild mannered person in many ways. So I frequently have that intrusive thought of like “oh my god, fuck you!” (laughs). But I don’t act on it! I don’t say it out loud, but I feel it.

Anna: In the music video, you bring two animated characters to life: IV and OV. Can you introduce them to us and explain what they stand for?

K.Flay: So these two characters, OV and IV, are representations of the two ends of everyone’s psyche. IV stands for inside voices and represents the “it”. So that would be the impulsive, primal, reckless parts of the brain. And then OV on the other side is a proxy of the super ego, which is in many ways our conscience and the realistic part of our brain that’s highly influenced by the expectations and norms of society (=outside voices). I wanted to help people understand and engage with their own IV and OV. Because I think when you are examining yourself or trying to make changes, it’s very helpful to represent that visually. For me it is, at the very least (laughts). So yeah, I wanted to create a bit of a world with these characters and help tell the story behind this EP, not just through the music.

“The more organic a collaboration is, usually the better it ends up being”

Anna: Good Girl is about being done with constantly needing to be nice and polite as a woman. Coming back to how long you’ve been working in this industry, you both observed and are part of this female empowerment movement, that I, purely as a fan, love so much. Being someone that inspires many young women, who are the women that inspire you?

K.Flay: Oh, the women that inspire me! (smiles) On a personal level, it’s the women in my life, that I’m close with that inspire me. My mum, my sister, my sister in law, my best friends, many of whom I had for like 20 years. I have many, very long and intense friendships which are super important to me, that chosen family. These are people who always encourage me to stand up for myself, to be honest, authentic and unselfconscious in the world. To fight for what’s important for me and for society, if I can. So, the folks who are influencing my behaviour and how I exist in the world and how I make music are non-musicians, they do all sorts of different things.

Anna: Also something that’s really interesting on your EP are the two features you got. One is

Travis Barker, contributing the powerful-driven drums on Dating My Dad, the other Tom Morello from Rage Against The Machine on TGIF. Were that collabs you’ve always wanted to do or just something that happened naturally?

K.Flay: That happened really organically. Both features on this did. Travis and I have a mutual friend, Nick Long. I was working on a song and it was missing something. Nick connected us and Travis recorded drums. We did that in the height of lockdown, when we couldn’t be in the same room, so we had to everything remotely. But it was a great experience and really exciting for me to watch and hear that song come to life that way.

And with Tom it was the similar thing. I know Tom because we’ve known each other for four years now, I’ve collaborated with him on his solo record. He’s one of the real gems in the music industry and I’m really honoured to know him (laughs). I texted him being like “I’m working on this song, I think you could absolutely take this to the next level and solo on it, would you be interested?” And he was like “hell yeah!”. So yknow, both of these collaborations were very organic. I found historically that the more organic a collaboration is, usually the better it ends up being.

Anna: Especially TGIF is a song that I can imagine will blow everything when you go on tour. What do miss most about touring and what are you most excited for?

K.Flay: I hope so! (laughs) I’m most excited for just the physical and emotional catharsis. Because there’s something really special about being in a room full of people who are united. Not because of how they look, how they identify, how old they are or how much money they have. But who are united in the appreciation in the enjoyment of a particular set of songs. And I think this is such a cool thing! Music is a great equalizer in many ways, and I miss that. I miss being part of that type of community. I try to be a very unselfconscious performer, I’m very spontaneous and free with my movement and body language. And I think a show is just a place where you get to just be weird and wild and let go of your self-consciousness. I’m looking forward to that, that freedom and that release.

Anna: Well, I really hope to see you play live soon, too!

K.Flay: Absolutely! Where are you based?

K.Flay: Oh, yeah, we’ll be there in February if all goes according to plan.

Anna: Fingers crossed! Our last question is always one that asks for an untold story – something you have never shared in an interview before. That can be something totally random an anecdote to the EP, anything that comes to mind.

K.Flay: Um… Hm. Well, we just talked about TGIF. I wrote this whole other pre-chorus that had like a different rhythm, all these different lyrics and no Thank God It’s Friday in it. And I sent it to the two producers I was working with on the song, and they were both just like “yeah, that’s cool, but the original thought was cooler”. I remember being a little bit heartbroken but it’s kinda funny looking back now because I think the song wouldn’t have so much of its meaning and sense of humour if it didn’t have that Thank God It’s Friday-section. And it’s always a curious thing to realise that often our first and unpremeditated instincts hold the key to something really special. So that’s just a little reminder with this song, it’s important to honour those first ideas that you have before you start to overthink everything. 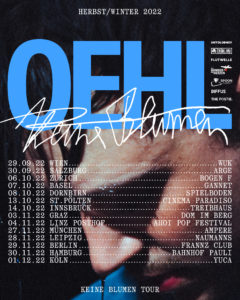 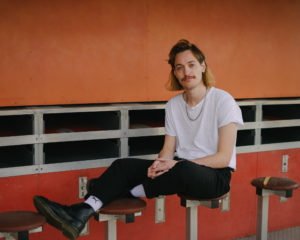